Before I dismantle my little [amazon &title=Raspberry Pi&text=Raspberry Pi] Robot #1 , I wanted to have a little video of its base_controller working together with the turtlebot teleop. It uses the geometry/Twist messages to transmit moving information like a lot of ROS Robots do.

As you see there is a little acceleration control implemented which makes the robot start smoothly and stop after gently after no key is pressed anymore. In case of emergency its possible to hit e.g. the space bar for a instant full stop.

This robot isn’t very fast – but the next one will be. So this was a successful ROS-learning robot which I can recommend to everyone who wants to know how ROS Robots work.
Its a bit hard to get all of the source compiled on the small arm cpu, and there are nearly no precompiled packages – but it takes away all the fear from compiling errors in the future 🙂

That’s one small step for a man, one giant leap for a small raspberry powered ROS robot.

Okay – maybe thats a bit too big – but I am in a good mood. I compiled the latest openni2_camera ros driver on the little arm cpu of the [amazon asin=B00LPESRUK&text=[amazon &title=Raspberry Pi&text=Raspberry Pi]]. Before that, I used the driver provided by kalectro (see source), which is an older fork but prepared for raspberry.

As a result of that, I’ve got some new features like the IR-Image stream I visualized with rviz :

or the handy little parameter with which it is possible to skip some frames which reduces the load a bit:

Now, running roscore on my laptop – I had some sensor_msg/Images I needed to convert into 3d depth data. After some little issues with faulty XML-launch files, I finally got openni2_launch up and running, which is a handy little launchfile using rgb_launch providing every data format you’ll can get out of the [amazon &title=Xtion&text=Asus Xtion].

Now I’ve had a /camera/depth/points topic, with a pointcloud2 datatype. Which is really nice because rviz can visualize it:

Houston, we’ve had a problem.

Yes, there were times when it was possible to land on the moon by the power of a daily life calculator – but todays robots need more than that 🙂 So my aged Intel Centrino Core 2 Duo ASUS-F3J with 1,7Ghz each core isn’t able to do more than I reached today. It pops to 100% processing and after some time it collapses totally.

So todays lesson learned is:

Robots are distributed systems – by every measure. 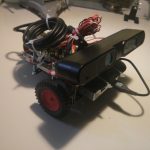 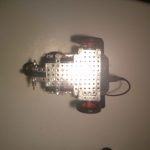 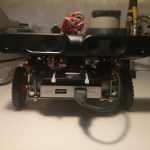 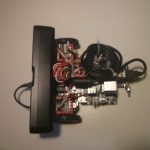 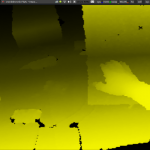 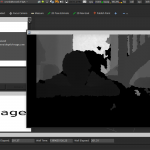 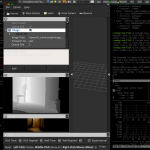